If you have content in different cells and you want to combine it, there are a couple of useful functions you could use – such as the CONCATENATE Google Sheets function and JOIN.

In this tutorial, I will cover examples of how to concatenate in Google Sheets.

Ampersand sign (&) is the concatenate operator that you can use to combine cells in Google Sheets.

For example, suppose you have the first name and the last name as shown below:

You can use the following formula to combine the first and the last name.

Note that I have used a space character in between the reference for the first and the last name as I want these words to be separated by a space character. You can use any separator (also called delimiter) such as comma, hyphen, semi-colon, etc.

While ampersand concatenates operate works great, it’s useful only when you have a couple of cells to combine. In case you have a lot of cells that you need to concatenate in Google Sheets, it’s better to go for the functions.

Concatenate function in Google Sheets allows you to quickly combine the values in cells.

Here is the syntax of the Concatenate function:

Now let’s see a couple of examples of using the CONCATENATE function in Google Sheets.

Suppose you have the data set of first name and last name and you want to join these with space in between.

Here are the steps to do this:

Note that the function has 3 arguments – the first name, a space character in double quotes, and the second name.

How to CONCATENATE Whole Columns

Once you have the formula in the first cell, you can use the fill handle to click and drag through the rest of the column too.

Example 2 – Google Sheets Concatenate With Separator Like a Comma

Suppose you have the same dataset of names, but instead of combining it with space in between, you want it in the following format: last name, first name.

Here is an example formula for Google Sheets to combine cells with comma:

Concatenate function can also be useful when you want to combine the text with a running number.

For example, in the dataset below, you want to get add a running number in front each name. So for the first name, it will be 01 – John Spike, for the second name it should be 02 – Brad Connor, and so on.

Here is the formula that can get this done:

So, to use CONCATENATE with the IF function, you can nest CONCATENATE as one of the value_if arguments.

Let’s look at an example where we only want to concatenate values if the value in the A column is less than 5:

Here are the steps to building the above formula:

How to Use the CONCAT Function In Google Sheets

Google Sheet CONCAT strings works exactly the same as CONCATENATE except you can only use two text strings instead of three or more. Any of the below examples that only use two arguments could also use the CONCAT function. CONCAT in Google Sheets is less powerful, so it may be best to stick with CONCATENATE.

Concatenate an Array of Cells with the JOIN Function

Suppose you have the same data set of names (as shown below):, however, in this

However, in this case, you want to combine the names and list these in a single cell (each name in a new line). You’ll need to use the JOIN function that uses the following syntax:

The following formula can get this done: 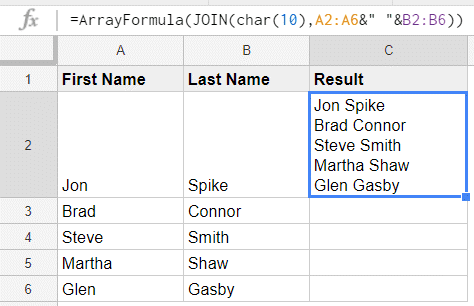 The formula uses CHAR(10) which would add a line break to the result of the formula.

This technique can also be useful when you have addresses with different parts in different cells in a row (such as house number in one cell, the street name on another, the city name on another and so on, and you want to combine it to create address labels.

While the CONCATENATE formula can get a little messy with multiple arguements, you can use the & operator more times than you’d need. Just make sure you have the operator on both sides of the central arguments like in the below example.

How Do You CONCATENATE in Google Sheets?

You just have to:

A full CONCATENATE function could look something like this:

How Do I Concatenate Two Columns In Google Sheets?

Use the above steps to concatenate one row in the columns, then use the fill handle or AUTOFILL to apply it to the entire column

Where Is the Concatenate Function in Sheets?

You could type =CONCATENATE into an empty cell or navigate to Insert > Function > All > CONCATENATE to find string concatenation in Google Sheets.

How Do You Concatenate 3 Columns in Google Sheets?

The CONCATENATE function in Google Sheets doesn’t limit to two columns, you can add 3 or more arguments to the function without any issues. So, to use the 3 columns with spaces in between it could be along the lines of:

Why Is Concatenate Formula Not Working?

What Is a Concatenation Example?

Concatenate basically means to join together the text strings in Google Sheets, like this:

Just remember, if you want to have something between the values, you need to add a delimiter between the arguments between double-quotes. In the above example, we use a space, like this ” “.

The above examples should keep you busy learning about these useful tools in Google Sheets, if you need to know more or have any questions, please let us know in the comments.

Now You Have an Understanding of the Concatenate Google Sheets Function, You May Also Like the Following Tutorials: