An Easy to Follow IMPORTRANGE Google Sheets Guide for 2023

Do you want to import the data from other Google Sheets into the one in which your working currently?

You can do this easily using the IMPORTRANGE function in Google Sheets.

While it’s really easy to connect two workbooks in Excel that reside on your hard drive or a network drive, the only way to connect two Google Sheets is by using the IMPORTRANGE Function.

Let’s see an example on how to use this function in Google Sheets.

How To Use IMPORTRANGE in Google Sheets

We’ll dive into some specific examples to make it clearer. But the basics of using the IMPORTRANGE function can be broken down into just a few easy steps.

Example 1: How To Use IMPORTRANGE in Google Sheets Using URLs or Spreadsheet Keys

Suppose you have different Google Sheets that have the test scores of students in different subjects (i.e., one sheet for Math score and one sheet for English and so on).

If you want to combine all these sheets and have the data in the same sheet, you can use the IMPORTRANGE function.

Step 1: Before you use the formula, you need to get the URL of the Google Sheets from which you want to import the data.

You can find that URL in the address bar of the browser when that Google Sheets document is open.

Alternatively, you can also copy the short key from the URL instead of the full URL (as shown below). For this tutorial, I will use the short key in the formula.

Step 2: Type the function and paste the URL or short key to add the first argument to the syntax.

Step 3: Type a comma and specify the range to import.

Below is the Google Sheets IMPORTRANGE formula that will allow you to import the names of the students and their scores into the current sheet using the short key from the above URL:

Note that the second argument of this formula is “‘Math Score’!A2:B10”. In this argument, you need to specify the sheet name as well as the range (enclosed in double quotes).

Step 4: When you enter this formula for the first time, you will see the #REF! error in the sheet. On hovering over the cell, you will see a prompt asking you to ‘Allow access’.

Click on the blue button, and it will give you the result. Note that this happens only once for a URL. Once you have allowed access, it will not ask for it again.

This can be helpful if you’re trying to get the data from multiple sheets. For example, in this case, you can get the score of all the subjects from different Google Sheets into a single sheet.

If you have to import ranges from several sources, it becomes easy to lose track of what’s what. But, you can name the ranges to make it a little easier. Just follow this process:

Step 1: In the sheet you wish to import from, highlight the range and right-click it, and navigate to More cell actions > Define named range. 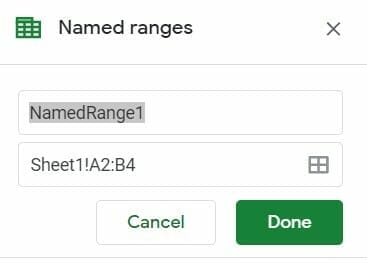 Step 3: In the new sheet, use the Google Sheets import range function with the named range as the range_string. In our example, it could be something like:

A Few Notes and Tips for Using Google Spreadsheet IMPORTRANGE

When using the IMPORT RANGE formula, make sure enough empty cells are available to accommodate the result of the formula. If you have some data in a cell that overlaps with the cell needed for the formula result, the formula will return an error. However, it helps in identifying the error by letting you know the issue when you hover over the cell.

If you’re importing the data from many sheets, it may get a bit confusing. It’s a good practice to create named ranges in the source sheet and then use the named range. For example, instead of ‘Math Score’!A2:B10, you can use ‘Math Score’!Data

Here some documentation by Google on the IMPORTRANGE function.

How Do I Use IMPORTRANGE in Google Sheets?

What Is IMPORTRANGE in Google Sheets?

IMPORTRANGE is a function that allows you to bring data over from one spreadsheet to another without having to manually enter it. It is better than copy pasting as it automatically updates.

Yes, any changes made to the initial sheet will change in the imported data too.

Is There a Limit on IMPORTRANGE in Google Sheets?

Yes, there can be a maximum of 50 cross-workbook reference formulas.

How Do I Filter IMPORTRANGE in Google Sheets?

You should use the QUERY function to filter data from imported data.

How Do I Use Multiple IMPORTRANGES in Google Sheets?

Follow the standard procedure for importing a range, but make sure each time you use IMPORTRANGE there is enough space in the sheet to display the data.

Can You IMPORTRANGE With Formatting?

No, you can only import the data itself.

If You Found This IMPORTRANGE Google Sheets Guide Useful, You May Also Like the Following Tutorials: