How to VLOOKUP Multiple Columns in Google Sheets?

VLOOKUP formula (or Vertical lookup) in Google Sheets is a formula that you can use to look for a value in a columnar data set.

For example, if you have a list of student names and their scores, you can use VLOOKUP to find the score of a particular student in a specific subject.

VLOOKUP is an extremely useful and popular Google Sheets function that is used by millions of people on a daily basis.

By default, the VLOOKUP formula can only look for a value in one column. But what if you want to look up multiple columns and then fetch the corresponding value.

For example, you have a full name (say Mark Wilson) as the lookup value but in your data set, you have the first and the last name in two separate columns.

In such a case, you need to somehow use VLOOKUP to combine multiple columns and use these as the lookup criteria.

In this tutorial, I’m going to show you a couple of methods  to you use VLOOKUP to use multiple columns as the criteria and fetch the corresponding value.

Suppose you have the dataset as shown below and you want to fetch the value for a name (say Winthrop Pletts) from column C. 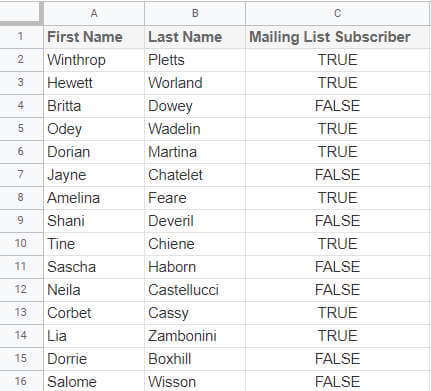 The problem here is that we have the first and last names in separate columns.

The trick to making it work is to alter the lookup array (the range) in such a way that multiple columns are combined to give you that one column that has the combined lookup value.

So we would create a helper column that would have the combined names, and then we can use this helper column to search and look for the lookup value

The following steps explain how to create a helper column and run a VLOOKUP on the new data.

Remember, VLOOKUP can only look to the right, so you’ll need to create the helper column to the left of the column value you want to return.

Using the ARRAYFORMULA function with VLOOKUP is a helpful way to create a new data set with the search key as a single column and show the related VLOOKUP return values.

The example data for this method uses a smaller list of customers but has an added column for email list subscription status.

Note: If you’re seeing reference errors, make sure the ARRAYFORMULA is correctly wrapping the VLOOKUP.

The methods detailed in this tutorial demonstrate how you can work around VLOOKUP limitations in Google Sheets. With a little effort and spreadsheet modification, you can run VLOOKUP multiple columns.

In this tutorial, we have only shown you examples where we had to combine two columns, but you can also use the same method to Vlookup more than two columns as well.