An Easy Guide for the Google Sheets ROUND Function

Google Sheets makes it easy to round numbers. It features several functions that can accommodate a wide range of rounding types. Whether you need to round to the nearest whole number, the second decimal point, hundreds, or by a factor of three, there’s a rounding Google Sheets function to help. In this tutorial, I’ll cover how to round in Google Sheets using various rounding functions (such as Google Sheets ROUND, ROUNDUP, ROUNDDOWN, and MROUND).

You can make Google Sheets roundup to the nearest 1 by using the aptly named =ROUND function. The feature uses a very straightforward syntax, with only the value inside the parentheses:

If you filled in the function with the number “2.6” as the value it looks like:

A round function with the number “2.6” inside will round to the closest whole number, so it will return the value 3. The function also works with using a cell reference, like “A2,” instead of a number. The following example shows three numbers, the ROUND function in Google Sheets referencing their cells, and the rounded result:

The ROUND formula will round numbers in Google Sheets to the closest integer whether that’s up or down, regardless of how many digits follow the decimal.

Google Sheets rounding numbers to wholes will only get you so far: eventually, you’re going to need to round to a decimal point. To use Google Sheets to limit decimal places you can modify the ROUND function to use a specified number of decimal places through a parameter. The syntax looks like this:

So if you want to round to one decimal place, you’d enter the value “1” for places:

If we applied this formula to the number “9.134” it would return “9.1” in the cell. If you want Google Sheets to round to 2 decimal places, use “2” instead, and so forth for any number of decimal places.

One of the interesting things this function can do is it can round to 10s, 100s, and so on if you use negative place value. For example:

This function rounds to the nearest 10s, which would round down and return the number 10. The following example demonstrates how Google Sheets rounds to decimal points with both positive and negative places settings: 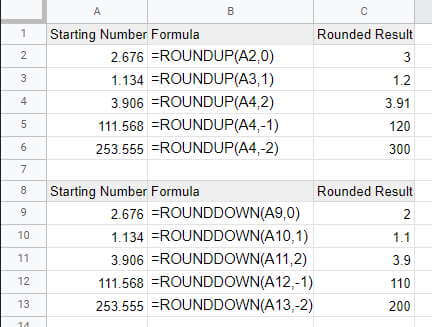 You can take your rounding capabilities in Google Sheets to a higher level using the multiple round functions. These functions round to the closest multiple of a given factor instead of a decimal position. The MROUND function uses this syntax:

It will round to the closest multiple of the factor. So if you enter the value as “14” and the factor as “5” the function will round to the nearest multiple of 5, which is 15. There are two additional multiple rounding functions called =CEILING and =FLOOR which perform factor-based rounding, but always round up or down respectively. Both CEILING and FLOOR use the same syntax style as the MROUND function:

The following example shows the formulas and results for rounding the numbers “7” and “8” against a factor of “3” for the multiple rounding functions:

Note: The multiple rounding functions all work with factors with decimals

The ROUND formula is useful for returning a result but requires referencing a completed calculation and a new cell if used on its own. Fortunately, Google Sheets lets you use ROUND as a wrapper to return a rounded result. For example, let’s say we want to add the values in cells “A2” and “B2,” but we want to round the result to the nearest whole number. To accomplish this, we can calculate the value of “A2” plus “B2” with the formula “=SUM(A2:B2).” We can wrap that formula inside =ROUND like this:

The following example demonstrates using the above formula to add “4.44” to “5.71” in cells A2 and B2 respectively, then round the result to the nearest whole number, which is “10.”

This is perhaps the easiest way to round up or down to a particular decimal place. All you have to do is:

How Do I Round in Google Sheets?

The easiest way to round in Google Sheets is to use the increase or decrease decimal places button in the toolbar. You can also use the ROUND, ROUNDUP, ROUNDDOWN, MROUND, CEILING, and FLOOR functions.

How Do You Round to the Nearest Whole Number in Google Sheets?

By using the ROUND function. All you have to do is:

How Do I Round All Numbers in a Spreadsheet?