How to Automatically Send Emails from Google Sheets (Using Appscript)

Spreadsheets these days are all about automating as many of your tasks as possible.

Imagine a scenario where you have to process an order, create an invoice, and then email the invoice to concerned parties while updating all necessary order details to a spreadsheet.

Believe it or not, it’s actually possible to do all this in one go and that too without using any custom application.

By using Google App Script, you can code the whole pipeline as part of your Google sheets and save it. The next time you need to process one or even hundreds of orders, all you need to do is run the script!

And you get all this without having to spend a penny on any invoice management software! Most importantly, you get to customize the process to do just your required tasks, so you have more control over the processing.

Let’s start simple. Let us send an email message to just one person using App Script. So, let’s say you have a spreadsheet with just one email address in a cell, an email message in the next cell, and the subject in the third cell.

The syntax in App Script to send an email is just one line:

where emailAddress, subject, and message can be replaced by references to the respective cells.

Here are the steps you need to follow if you want to use App Script to send an email to a designated address:

2. You will find a template for a function already present. You can just start coding with this. Let’s rename this function as sendEmail. So, replace the word myFunction (which is the function name), with our new function name, sendEmail.

Finally, in line 6, we are using the MailApp.sendEmail() function to send an email to the intended email address, with the subject and message contained in the respective variables.

That’s it, your coding part is done.

4. Save your project by selecting File -> Save. Give it any name you like. We’re just going to go ahead and name it ‘sendEmail’. You can now run the code to see if there are any errors by pressing the

button in the toolbar. When you run the code, you will be asked for permission to access your data on your Google sheet.

b. You will then be given a warning that your App has not been recognized by Google and that you should proceed only if you know the author. Well, you’re the author, so you obviously don’t mind. Click on Advanced, then scroll down and click ‘Go to sendEmail’.

c. When you get the confirmation, just click Allow.

That’s it, you will find a small message on top of your Script Editor screen saying that your script is running.

Once the message goes, your code is done running.

If you check the inbox of the recipient email address, you will find an email message from your Gmail account, with the subject and message that you had in your Google Sheet cells. 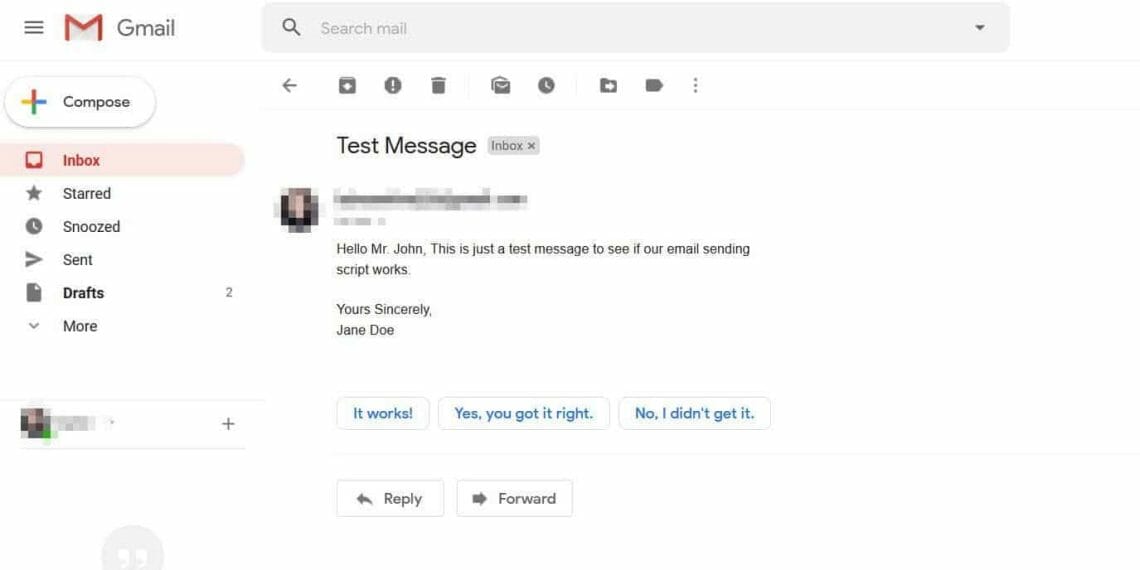 5. Now, let’s add a button to automatically run our script.  Insert drawing of a button or any image of your choice into a corner of your sheet:

Click on the button, select the three dots on the top right corner of it and select ‘Assign Script’. Then insert the name of your scripted function, which in our case is sendEmail:

Once this is done, you can simply click this image whenever you want to re-run your script

6. Now whenever you need to send an email, you only need to click this button.

Of course, this example was just to make it simpler for you to understand the basic coding strategy when sending emails using App Script. Obviously, this could have been easier if you had just sent the email directly from your Gmail account. But what if you want to send emails to a number of recipients, or only to those who satisfy certain conditions? That’s when App Script can turn out to be quite useful.

Sending a Single Email to Multiple addresses in Google Sheets

Now say you have an email list and you want to send the same message to all or some of them. For simplicity, we have just three addresses, but you can have more. We have the list of email addresses stored in Sheet1 and the email message in Sheet2. 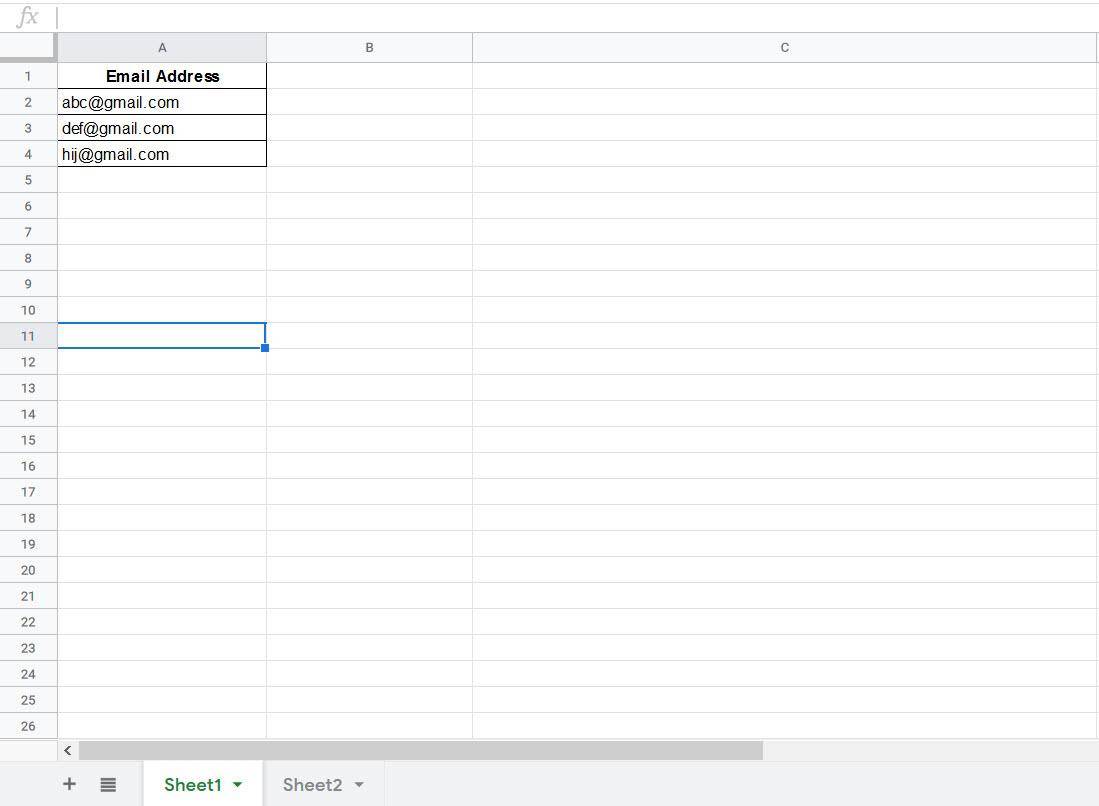 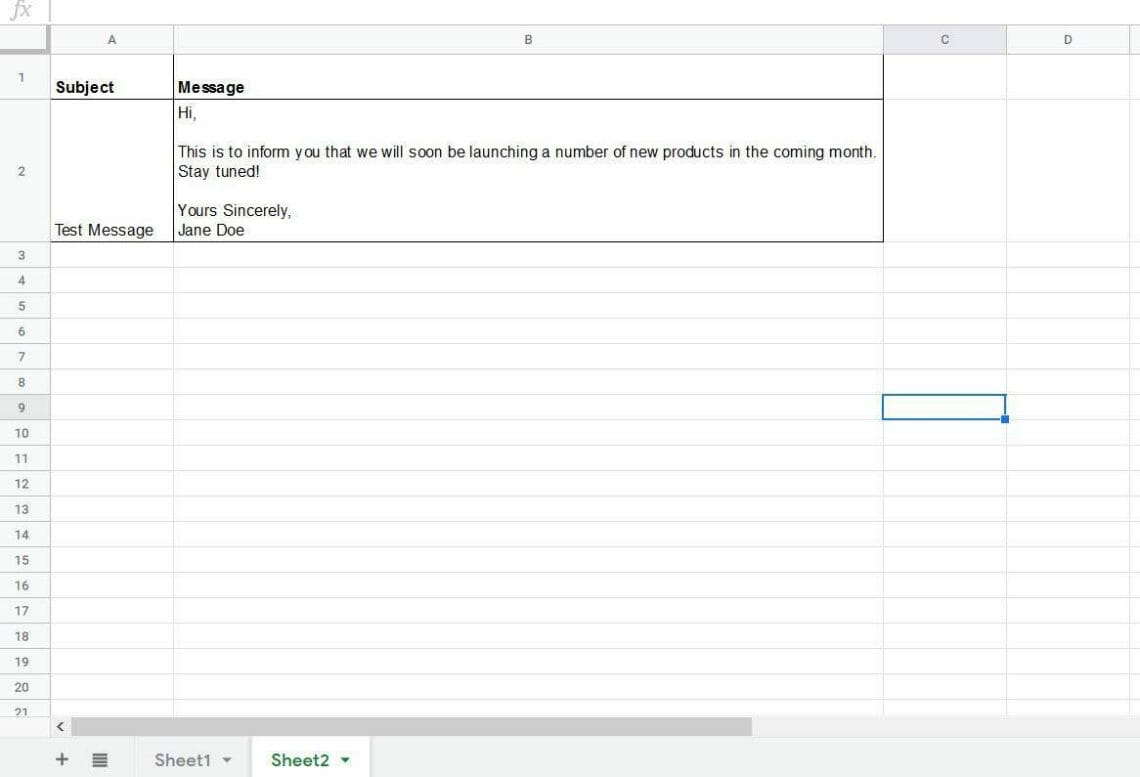 Here’s the entire code that you need to type:

Let’s go through the above code line by line:

In the first three lines, we are getting access to both sheets and storing their handles in variables sheet1 and sheet2. Next, in lines 4 and 5, we are creating variables for the subject and message and assigning them their respective values. The subject is assigned the value in cell A2 of Sheet2 and the message is assigned the value in cell B2 of Sheet2.

Now for the main part of this code. In line 6, we used the getLastRow() function to obtain the number of rows (number of email addresses) in sheet1.

A for-loop usually has the following general format:

The loop takes a counter (for example, a variable, ‘i’) and keeps increasing it by a certain amount. As long as a <<condition>> is true, the loop will keep repeating the execution of statements within curly brackets.

Let’s understand the for-loop that we used in our code:

First it gets the email address at cell (i,1). Since i = 2, the variable emailAddress holds the value in cell A2 of sheet1. The MailApp.sendEmail() function then sends an email to this address with the subject and message.

Once the statements in the curly brackets are executed, i is then incremented by 1 (i++). So now i = 3.  Again, it is checked if the condition (i < n+1) is true. It’s still true, so the two statements:

are again executed. This time emailAddress holds the value in cell (3,1) or A3. Again the MailApp.sendEmail() function sends the message to this address and i is again incremented by 1.

This goes on until the condition i < n+1 is false. That means, as soon as i = 4, the condition becomes false and the looping stops.

When you run this code, you will find emails sent to all the addresses in your Sheet1.

The above method is quite practical and really helps automate email sending when you have to send the same email to many people. However, instead of using the same email message it makes more sense to send messages that are a bit more customized. Most of the time it makes sense to have a template of an email ready and then customize the email according to its recipient.

Say you have a list of customer names, customer email addresses and items that they ordered. This is stored in Sheet1. You also have Sheet2, which contains a message template that needs to be customized with the corresponding recipient’s <name>and <item> ordered. 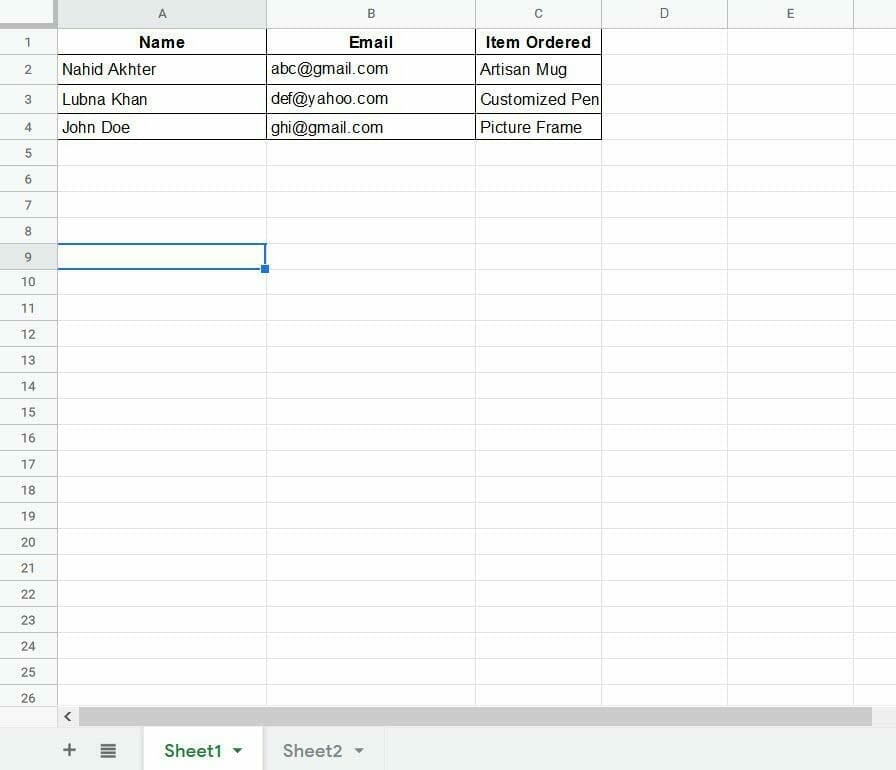 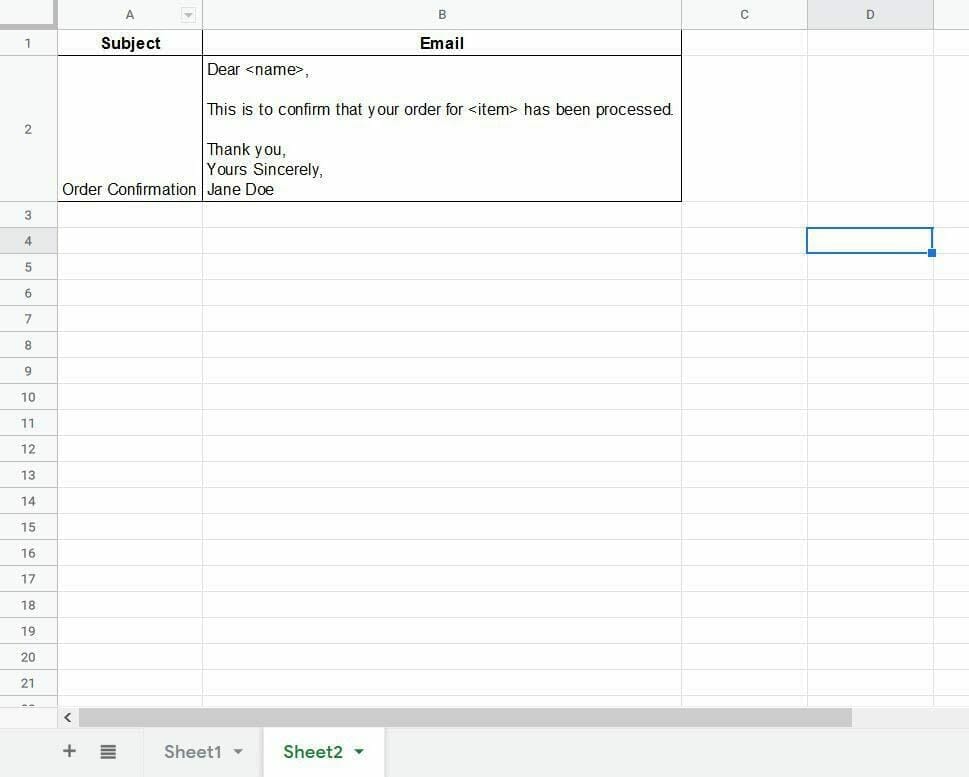 Here’s the entire code that you need to type:

Let’s go through the above code line by line.

The first five lines are quite clear by now. Let’s just take a look at what’s inside the for-loop. In lines 7, 8, and 9, we are acquiring the email address, name and item ordered, one row at a time:

In line 10, we acquire the message template and store it in a variable named message.

So, in line11, we use the replace() function twice to accomplish both these tasks. The result after the replacement is again stored back in the variable message.

Now that we have our emailAddress, subject and corresponding message, we just put them together in a MailApp.sendEmail() function and ship the email over to our target address. We do this over and over for each iteration of the for loop till we are done with all the email addresses in our list.

Here’s how one of our final emails looks. 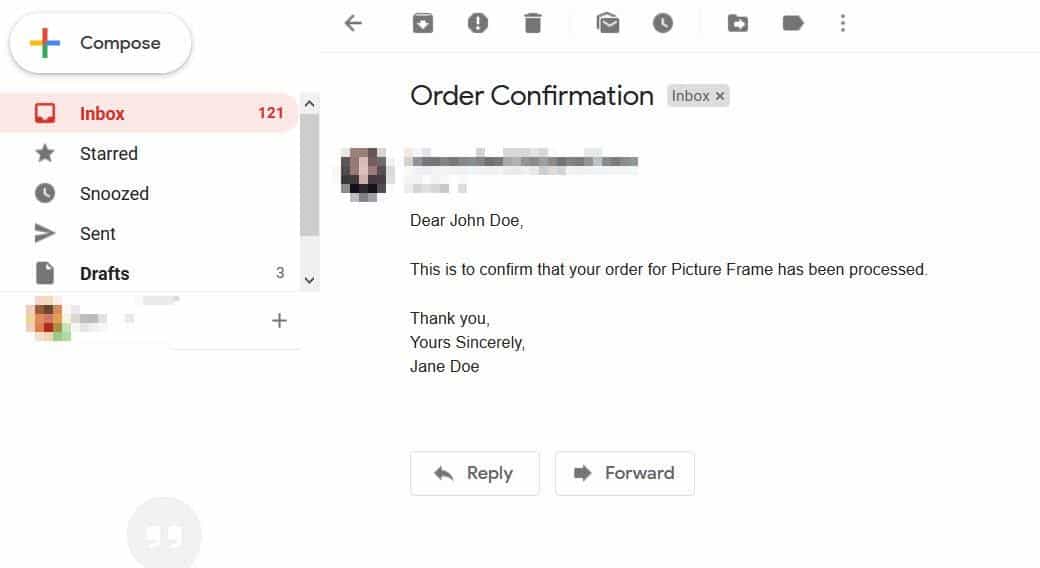 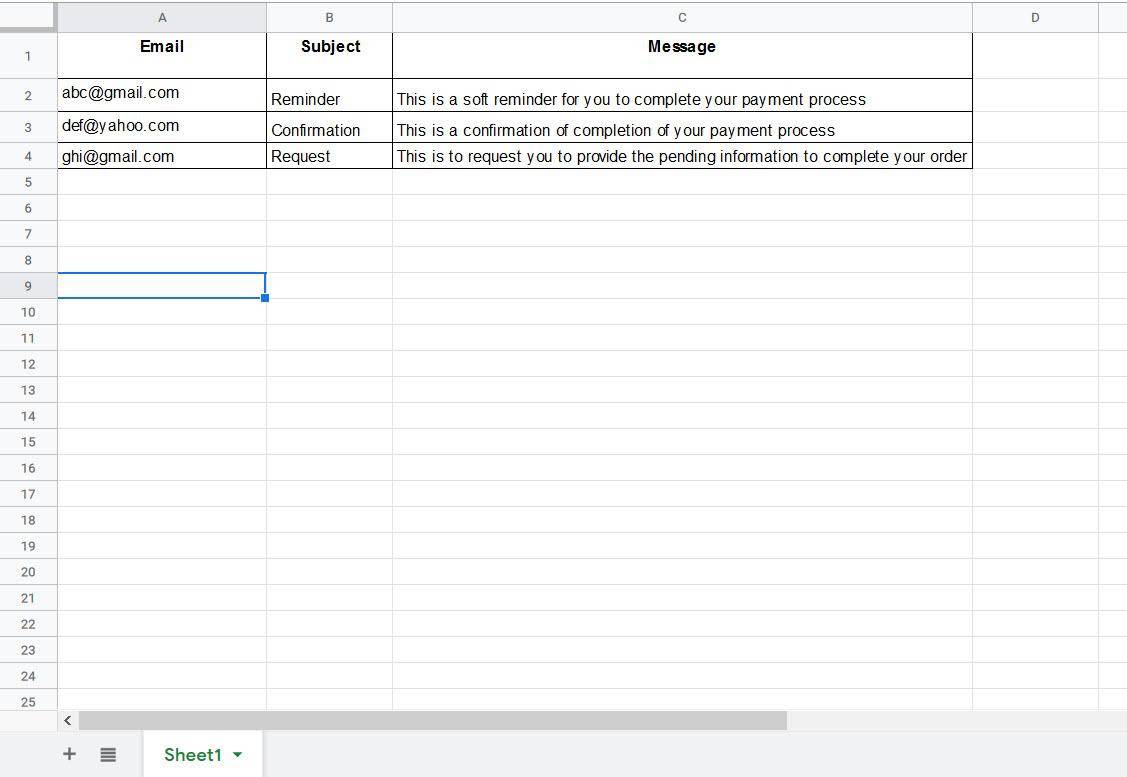 This is quite simple. We just need to take cell values of each email message one by one inside the same for-loop, similar to how we took cell values for the email addresses and names. Here’s the full code:

In this article, we saw how to use an App Script to automatically send emails with the click of a button.

We hope you found this tutorial helpful. We would love to get your feedback and suggestions in our comment section.