Wildcards are a very versatile set of symbols that help you select a group of similar strings at a time.

In this tutorial, I will cover what are wildcards in Google Sheets and how to apply them.

We will also take a look at a few use-cases where wildcards can be highly helpful.

What are Wildcards in Google Sheets?

Wildcards are special symbols that help maximize your search results by representing one or more string characters. Google Sheets lets you use three different wildcard symbols:

What are Wildcards Used For in Google Sheets?

Wildcards can be useful when you want to search or replace strings containing a particular character or a group of characters. You can add them to search strings and use them inside Google Sheets functions.

The most common applications of wildcards are in the following cases:

Let us take a look at some of the above use-cases to understand the power of wildcards.

Using Wildcards in a SUMIF Function

A smart way of using the SUMIF function is to incorporate wildcards into the condition part of the function. For example, say you have the following dataset containing Total Sales of different phone models:

If you want to find the total sales of all Samsung models, you can use the ‘*’ wildcard in your SUMIF function as follows:

This should display the sum of Total Sales of Samsung phones in cell D2.

In this example, the condition “Samsung*” means ‘find all cells that contain the word, Samsung’. It doesn’t have to be an exact match, but the cell should contain the word ‘Samsung’, along with any other character(s).

In other words, the wildcard ‘*’ helped find different variations of the search term ‘Samsung’ in column A.

Using Wildcards to Filter Data Based on a Condition

Using wildcards can also make it really quick and easy to filter data based on a condition. For example, say you have the following dataset of machine models: 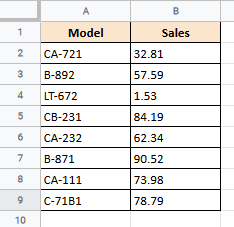 Let us say you want to filter the data so that only information about models starting with the letter C and ending with the number 1 are visible. This can be very easily accomplished by using the question mark wildcard, as follows:

This will instantly filter the results and display only 3 rows corresponding to models CA-721, CB-231, and CA-111.

The question mark wildcard acts as a placeholder for any character in your search string. So, entering the string ‘C?-??1’ will only filter out the rows corresponding to models that have the given format: C followed by a character, followed by a hyphen, followed by two more characters, followed by a 1.

Since the last model, C-71B1 does not follow the same format, it is not included in the filter, even though it starts with a C and ends with a 1.

With the same methodology, you can use various criteria to filter results. For example, if you want to filter all the models that begin with C and contain the alphabet B in it, you can use the search string C*B. This will give only two results – models CB-231 and C-71B1.

When you want to use VLOOKUP to find a value in the source table that isn’t an exact match, but a partial match, wildcards can be quite helpful.

For example, say you have the following source table of URLs, and you want to find the URL containing the name ‘amazon’ from the list: 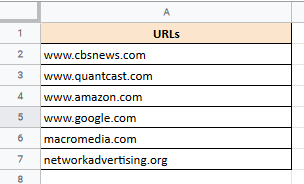 You will notice from the above table that none of the URLs in the source table have an exact match for the name ‘amazon’. But it does exist as a partial match in cell A5. Using the VLOOKUP function to make a partial match like this is called a Partial Lookup.

Let us see how we can use wildcards to make a partial lookup for the lookup table shown below:

You should now get the list of all URLs from the source table that contains each of your search strings.

Instead of using the regular VLOOKUP formula:

We incorporated wildcards by flanking the cell reference C2 with an asterisk on both sides as follows:

This made sure the VLOOKUP function looked for any text in the source table that contains the word in cell C2, even if it has some characters before or after it.

So, the formula will look for a match and when it gets one, it returns the full URL corresponding to the given word.

Related: How to VLOOKUP Multiple Columns in Google Sheets

Use-case for the Tilde Wildcard

The tilde wildcard (~) may not be used very often, but it’s good to know how to use it nonetheless.

As explained before, the tilde wildcard is used to tell Google Sheets that the next character should not be considered as a wildcard, but as a regular character symbol.

Let us take a small example to understand what this means.

Let us say you have the following dataset and want to count all the cells that contain exactly the word c*t only – not cat, and not cot. 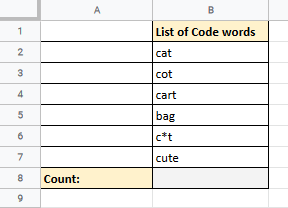 Below is the formula that uses the asterisk wildcard to get the strings that start with C and end with T: 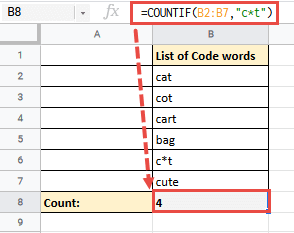 This is not what we wanted, as it counts all the words that start with C and end with T.

This is because the COUNTIF function sees the asterisk symbol is a wildcard, rather than a regular character symbol. So wherever it sees a cell containing a word that starts with c and ends with t, it counts that as a match.

To make sure the COUNTIF function counts only the cells containing the exact string ‘c*t’, we need to use the tilde wildcard (~) to escape the asterisk character, as follows:

This will now return 1 as the result since there is only one cell in the given range that contains the exact string c*t. 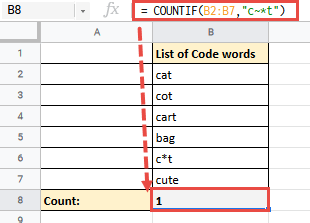 In this tutorial, we discussed wildcards in Google Sheets.

We discussed the three wildcards (asterisk, question mark, and tilde) that can be used in Google Sheets and demonstrated how to use them using three use-cases.

We hope this was helpful for you and encourage you to make use of the power of wildcards to refine your searches and conditions.

How to Count Cells If Not Blank in Google Sheets 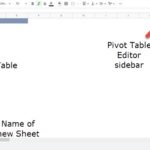 How to Convert Time to Decimal in Google Sheets 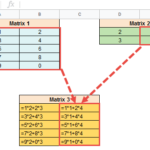 How to Use MMULT Function in Google Sheets: An Easy Guide

How to Count Cells If Not Blank in Google Sheets

How to Convert Time to Decimal in Google Sheets

How to Use MMULT Function in Google Sheets: An Easy Guide